Need IN the Midst of Plenty: Hunger in California, a project for the Sacramento Bee in 1986-87.

David Brince, 23, of Yreka, CA looks forward to better times and a secure place to live after spending many months in a homemade shelter on the outskirts of town.

Brince spends part of his day reconstructing a place to live near Yreka Creek. Using scraps of material he has gleaned from the area he made a temporary structure to protect hime in the winter months ahead.

Two free meals a week are given to the needy at St. Joseph's Catholic church in Yreka. Prince says that without them he would be a lot worse off than he is now.

Every evening David traces familiar routes to search for food. He stops in downtown to talk with an acquaintance before continuing on his search.

David is not haphazard about his food searches. He knows he must find something in order to survive. He knows all the dumpsters in town that might contain edible food.

At one of the dumpsters he finds a frozen fish, an apple and some other items. This was a good evening for him.

David receives $81 in food stamps a month but uses the food he busy sparingly. He built a small stove from an old drum and a few rocks. He has a fry pan to cook with. This night he opened a can of beef stew, his first meal in two days. He keeps two pups for companionship and manages to find enough extras food for them to eat as well.

The daylight hours are usually spent walking around town, stopping a various coffee shops where he drinks many cups loaded with sugar and cream for the extra calories.

The short path back to the area where David has his makeshift home is across I-5 and Yreka Creek. IN the 1850's the area known as Yreka Flats was considered to be some of the richest land on Earth for the gold discovered there.

David spends a lot of time alone in deep thought and contemplation about his life and future. He thinks there is still a future for him that does not 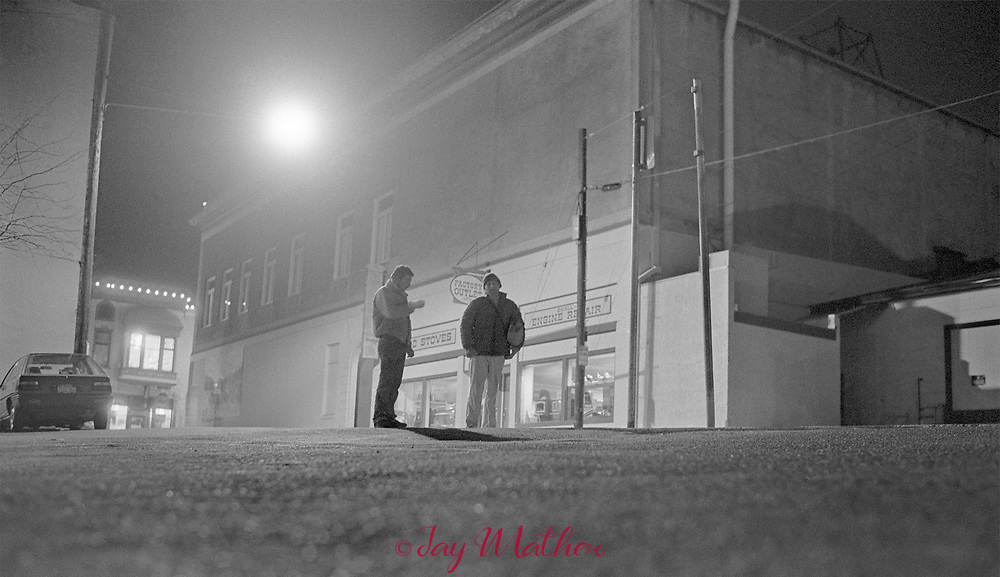